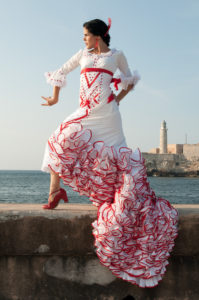 Irene Rodriguez on the Malecón

In Cuba, dance and music are inseparable. To visitors, it seems as though every Cuban is born with an innate rhythm, impeccable footwork and endless energy for smooth, sensual and complex movements. Like Cuban music, the traditional dance forms are a combination of African and Spanish-European influences with strong roots in African religious rituals.

Ballet is held in high esteem in Cuba. The Cuban National Ballet Company, led by former American Ballet Theatre dancer Alicia Alonso, has won international acclaim for its repertoire which includes classical and modern pieces, many choreographed by Cuban masters. The Cuban Folkloric Ballet performs ritual dances and chants from Afro-Cuban cultures, and is but one of several groups dedicated toward maintaining the heritage of African culture on the island. The well-respected Contemporary Dance Company performs avant-garde and traditional choreography, and run courses for interested students through the Teatro Nacional de Cuba.

There are many venues, from grand theatres to cabarets to festivals, in which to see first-rate dance performances in Cuba. Likewise, there are many respected schools and institutions offering private and group classes for those persons wishing to study dance. Many professional dance groups - both classical and traditional Afro-Cuban - offer workshops several times each year that are catered to foreigners. And on the street and in discos, the average Cuban will warmly encourage your learning the basic Salsa steps.

Cuba Cultural Travel can arrange individual and group excursions to Cuba with a focus on either traditional or classical dance forms. Whether you plan to be a spectator or a participant, we can arrange a complete schedule that complements your abilities and interests.